Vocus Group Limited announced earlier this week it had sealed a deal with Alcatel Submarine Networks (ASN) for the construction of a 4,600km submarine cable between Australia and Singapore/Indonesia.

The cable will provide a minimum 40 Tbps (terabits per second) of capacity - 41,942,977 Mbps. That's some serious bandwidth - fast enough to stream more than 8 million HD movies simultaneously, and with some bandwidth to spare. 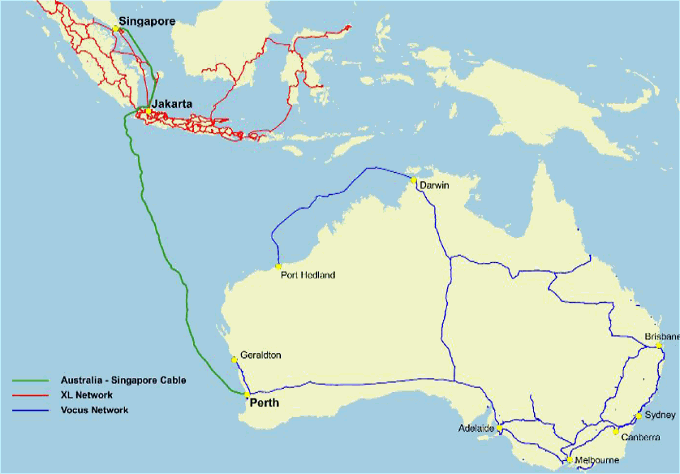 It's expected the project, costing ~US$170m, will take approximately 19 months to build and has a completion date target of August 2018. Two vessels with 5,000km of submarine cable on board will lay the complete length of the cable from Singapore to Perth.

Once in place, the Australia Singapore Cable is expected to have a service life 25 years minimum.

"The investment case for ASC is underpinned by strong demand, the need for diversity and resilience for both the Australian and Asian markets, and the fact that ASC will connect Australia to Southeast Asia, India, and Europe at lower round-trip times, outperforming any other existing cable system," says a statement (PDF) from Vocus.

Demand for data capacity on the route is growing at a very rapid clip and Vocus says the only other comparable cable system is approaching full capacity.

A report commissioned earlier this year on the project estimated demand for bandwidth between Australia and Asia would top 50Tbps by 2029 and forecast 30 percent of Australia’s overall international bandwidth will be connected to Asia by 2019.

Lightning Broadband acquires bandwidth from the best of Australia’s tier-1 providers, including Vocus. Vocus owns an extensive national infrastructure network of metro and back haul fibre connecting all Australia's capitals and most regional cities.

Another major cable project under way and close to completion with benefits for Australia is an ultra-high capacity submarine cable system between Los Angeles and Hong Kong. The project, a joint venture between  Google, Facebook and other communications companies, will have a staggering 120 Tbps capacity.