The following screenshot from the segment shows the speed at which an apartment building in Melbourne is connected via Lightning Broadband  - a staggering off-the-dial reading of 5,000Mbps+. 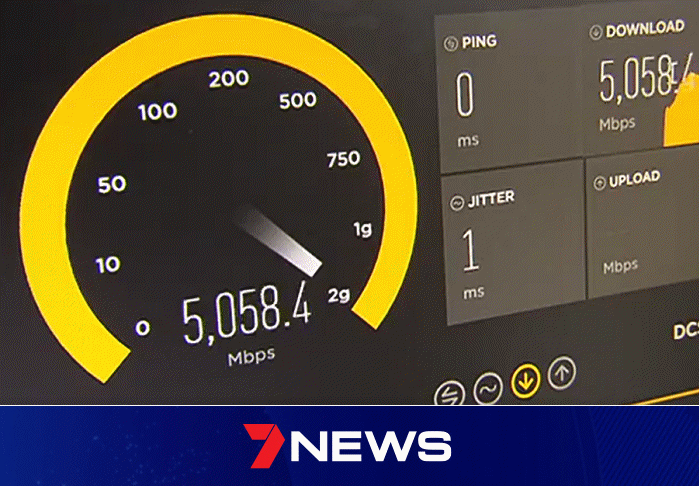 "We over-engineer the network so there's no congestion - so people get the speeds they pay for," said Lightning Broadband CEO Jeremy Rich.

The segment certainly stirred up a great deal of interest in the ISP, so much so that the Lightning Broadband web site was unavailable for a short period last night and demonstrating many Australians are still hungry for NBN alternatives.

The 7 News story can be viewed here.

As well as providing internet access to homes and businesses, Lightning Broadband has been very popular with Melbourne's apartment developers seeking to offer Fibre-To-The-Building (FTTB) connectivity to residents.

The company currently has seventeen activated apartment buildings in its Melbourne portfolio and more in the pipeline. Residents of Lightning Broadband activated apartments can select from a wide range of plans offering from 25Mbps to a crazy-fast 500Mbps.

For building owners and developers, it's a win-win situation - Lightning Broadband fits out the building at zero cost to the developer/owner and the building stands out from the pack for its super-fast connectivity, which is increasingly become a must-have rather than a wishlist item for residents.

In addition to direct fibre solutions, Lightning Broadband also offers stand-alone residential fixed wireless services. The company runs its own fibre connection to a tall central building (such as an apartment building or office block) and then broadcasts a signal from a tower on top of the building to small receivers mounted on the rooftops of customers' homes in the area. Lightning Broadband was among Australia's first fixed wireless ISPs to roll out 5G technology on some of its dozens of towers across the Melbourne region.

Another very attractive aspect of the company's offerings is all plans have unlimited data - a must these days given the data demands of activities such as video streaming.

"A lot of people have been underwhelmed with the performance of NBN, and it's really created an opportunity for businesses like Lightning to step into the frame," said IT expert Craig Joyce in the 7 News segment.

While currently only available in Melbourne, Lightning Broadband is preparing to enter the Sydney market, followed by Brisbane and other capitals.

Further information on Lightning Broadband's services can be found here.