Oakleigh Getting Its Super-Fast Broadband On

(Melbourne, Victoria --- October 2, 2016). More than 80% of homes and businesses in the Melbourne suburb of Oakleigh can now access blistering fast broadband - without the NBN.

While the NBN isn't available in Oakleigh yet (and won't be for some time to come), ISP Lightning Broadband is. The service delivers faster internet speeds than the National Broadband Network and at a very affordable price.

The availability of super-fast connectivity is the result of a Lightning Broadband project at Atherton & Atkinson, a new apartment and commercial development situated in the heart of Oakleigh.

Thanks to a communications tower installed atop the building, not only are the building's residents and businesses benefiting, but also much of the suburb.

The image below indicates current coverage in Oakleigh - just about any address within the circle can expect a truly high speed internet experience. 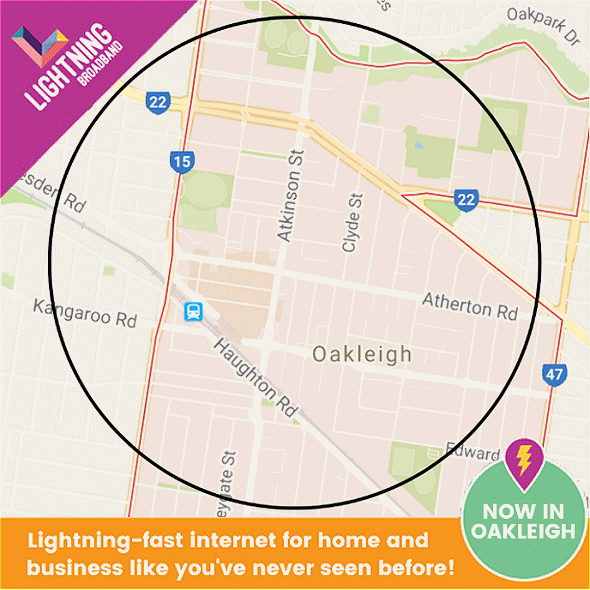 Oakleigh residents can enjoy unlimited data and speeds of up to 100 Mbps on Lightning's home broadband plans. The service is symmetrical, so that means 100 Mbps upload as well download - another advantage over the NBN.

"Our service is aptly named," says Lightning Broadband CEO Jeremy Rich. "We're very pleased to have extended our services to much of Oakleigh and the level of signups has been very encouraging."

As well as bringing high speed broadband to the suburb, the Atherton & Atkinson project brought the building's developers a major benefit - a point of difference with regard to connectivity available in other apartment buildings.

"Additionally, the installation was carried out at zero cost to the developer; and with minimal disruption," says Mr. Rich. "We've been seeing significant interest in our services from apartment developers and body corporates throughout the Melbourne metro area."

Lightning Broadband won't be stopping at coverage in Oakleigh, Melbourne and Victoria - the internet service provider intends expanding throughout the country where there is sufficient demand and where topography allows. Australians longing for truly fast internet connectivity are encouraged to register their interest at Lightning Broadband's web site.

For further information on Lightning Broadband or media enquiries, the team can be contacted here, via hello@lightningbroadband.com.au or on 1300 596 426.